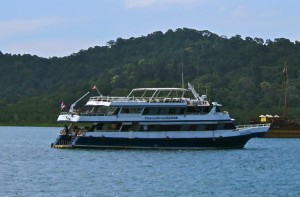 Arrival time for our guests was 17:00 so we got our gear ready and did all required briefing. We were all excited to start our first day diving the next day at Richelieu rock.

What a great start we had at Richelieu rock. We had the dive site all for ourselves and with a lot of feeding action where emperors, jacks, trevallies hunted the glass fish. There was an enormous great barracuda on the hunt while being followed by hundreds of juvenile big eye jacks. The dive was topped by 2 sea horses, Jan pipe fish and many nudis. Time for our border crossing and Myanmar here we come.

We woke up with a stunning starry sky and once the sun came up, there was not a single cloud in the sky, giving us a beautiful sunny day. Our first dive at Fan forest pinnacle honored its name. At depths from 15m to 35m, the whole pinnacle was covered with sea fans topped by large schools of mackerels, fusiliers, jacks and trevallies. We spent our afternoon at western rocky and while going through the cave, dozens of lobsters posed to our photography enthusiasts as well as many nudis and colorful hard and soft corals. What a great start at Myanmar.

We headed north to three islets where diving got even better. Our first dive was at South Flanker where a large school of yellow tail barracudas cruised by us, making the perfect opportunity for great photography. With some current, coral polyps were wide open and the feeding action excited all the divers. The topography of shark cave was just phenomenal, the amount of yellow sponges inside this massive swim through is just breathtaking, making this day extra special.

We have arrived at Black rock and although current was strong, it brought us a lot of action and great visibility. Fusiliers were swimming around trying to escape from the schooling barracudas, massive giant trevallies and dog tooth tunas were everywhere. We also saw many species of morays, cuttlefish, marble stingray, blue dragon nudibranch measuring 3 millimeters and 2 very beautiful nudibranch that we could not find on the books which could be new species. 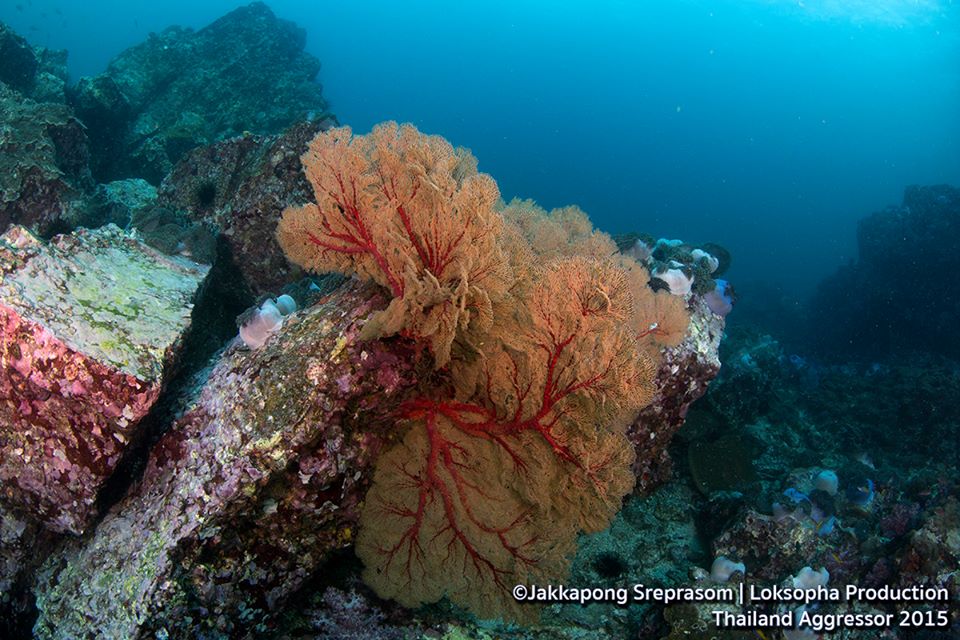 We started making our way south where we did 2 dives before crossing the border, back to Thailand. We dived Rocky one and High rock and we saw cleaner pipefish, nudis, rainbow runners, fusiliers, jacks, trevallies, wahoos and dozens of scorpion fish. Those dive sites are covered with green cup corals and beautiful soft corals giving a great dive to everyone. In the afternoon we did our land tour for some cultural experience where we visited a beautiful temple in Kaw Thaung and while having a delicious dinner, we headed towards our next destination in Thailand.

What a great end of week we had. We started our dive at Tachai pinnacle where hundreds of fusiliers danced for us while jacks, barracudas and giant trevallies hunted them. The day carried on at Koh Bon and with 30 metres visibility and the amount of soft and hard corals, glass fish and a giant grouper made that dive just amazing. We finished our day at Boonsung wreck, although there were mainly macro life such as a variety of nudis, flat worms and mantis shrimp, we saw 3 massive cobias and more than 5 giant honeycomb moray eels.

It was a great week and we all had a great time. We had to say fair well to our dear friends and they did say they will be back for the third time.