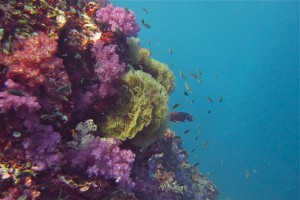 A biological research team, led by the Fauna & Flora International organization, has conducted an 11 days research expedition into the Mergui Archipelago. The scientists were amazed by the biodiversity, especially the abundance of coral species but admitted that the area is still suffering from overfishing and blast fishing.

The team was joined by eight recently trained burmese divers who were dispatched into the Mergui Archiopelago for several months before joining the 11 day research expedition consisting of members from Fauna & Flora International, the Smithsonian Institute, CORDIO East Africa, IUCN, the Myanmar Forest Department, the Myanmar Environmental Conservation Department and the Mawlamyine University. The results of the survey showed a highly diverse eco system and revealed several unidentified species. On the positive side is the abundance of coral species and their distribution throughout the Mergui Archipelago. Expectedly the abundance of corals should be highest on the outer side of the Archipelago where waters are clear and nutrients are rare which is usually what corals rely on to survive. But the team found an amazing number of places around inshore islands with very murky water where corals (especially hard corals) seemed to thrive and prosper. These places where also amongst the species-rich places the scientists have encountered. This very unusual finding, plus the fact that obviously new unidentified species of coral was found during the expedition could draw a lot of scientific attention to the Mergui Archipelago in the near future.

On the other hand, the research team stated that population of fish species which travel between coral reefs, are still on decline indicating ongoing overfishing activities. Also signs of regular blast fishing were recorded and confirmed by members of the expedition team. Generally the southern part of the Archipelago seems to be in the worst state concerning all criteria – abundunce of reef travelling fish, blast fishing activities and coral coverage are all to be found in better shape in the middle and north of the Mergui Archipelago.

Flora & Fauna International wants to continue surveys and expeditions as well as start projects with the local population and stakeholders to improve the overall situation. The Myanmar Government is looking into an UNESCO World Heritage application for the entire region of the Mergui Archipelago which will require many more expeditions and local community work for a sustainable future of the region.

“With Myeik proposed as a potential World Heritage Site, we wanted to get a clearer picture of what the situation was on the outer reefs, where human impacts were likely to be less severe. What we found was a seascape bursting with life.” – Sophie Benbow, FFI Asia-Pacific